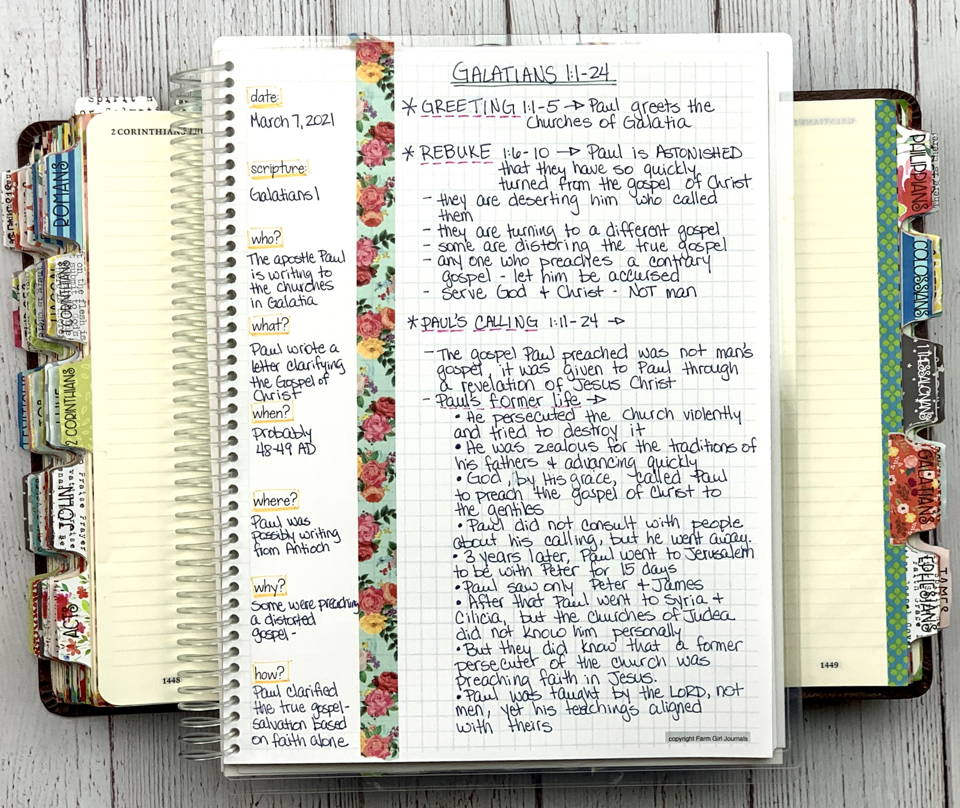 Welcome to the first day of our Galatians study!

I am so glad you are here and I pray this study is a blessing to you. Let’s dive on in!

Chapter 1 of Galatians can be broken down into 3 parts - a greeting, a rebuke, and Paul’s calling by God. I am going to skip the greeting because it is pretty standard for an epistle, and jump right to the rebuke.

As usual, Paul does not mince words here. He is ASTONISHED that the churches in Galatia have so quickly deserted the gospel of Christ. Ouch. As a new church receiving this letter from Paul, that must have hurt!

You may have wondered what it is these churches have deserted, so here's a little background. During the building of the early church there were some serious growing pains - which, given the 2 groups involved, is completely understandable. On one hand we have the Jews who accepted Christ and began to follow The Way. They brought with them their Jewish background, traditions and culture which was their identity. On the other hand, we have the gentile believers who had no experience or understanding of the laws and traditions that were so important to the Jewish believers. So, some Jewish believers began to teach that gentiles needed to become Jews before they could be part of the church. This was the gospel Paul was referring to when he asked if the churches were seeking to please man or God. Christ never taught the need for gentiles to convert - that was something people were adding to the gospel which changed it completely.

Following his rebuke, Paul goes on to remind them of his conversion story. Why? Because he is reminding them that his teachings are straight from the source. He was called by God and received instructions from Christ, not men.

Next week we will see Paul continue to retell his story, as well as give us the theme of Galatians - that we, as Christians, are justified by faith alone and we ware all equal in the eyes of God.

I hope you are enjoying week 1 of our study. What stood out to you about chapter 1? Any new revelations? I can’t wait to see your posts!❤😍❤ 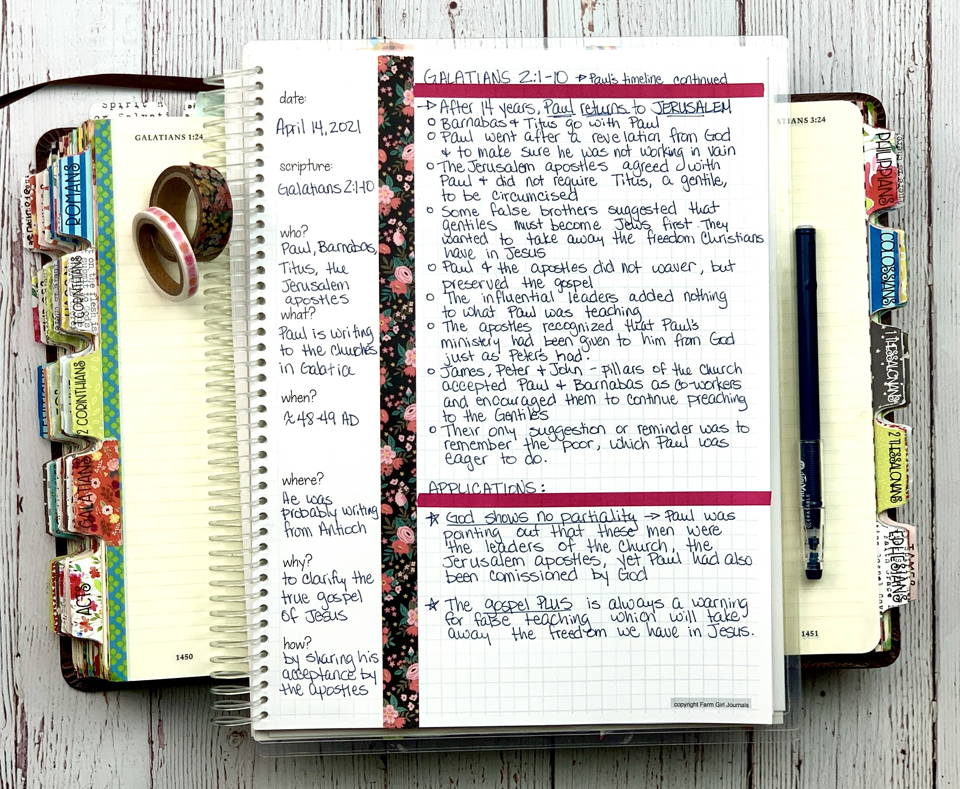 Good morning! I hope you enjoyed our passage for this week. It was short but packed with great stuff! Let’s dig in.

In chapter 2 Paul continues to remind the churches in Galatia who he is and where his authority as a teacher of the gospel comes from. In this section he explains what happened when he went to Jerusalem and met with the apostles. He tells us that Barnabas, a Jew, and Titus, a gentile or Greek, went with him.

Why does it matter that Titus was a gentile? Well, the false teachings that were circulating in Galatians centered on the belief that for a person to become a Christian they must first become a Jew. Paul points out that even the apostles in Jerusalem had no problem with Titus being uncircumcised (which he would have to have been if he was to become a Jew first).

While they were in Jerusalem they encountered what Paul refers to as false brothers who, by teaching a false gospel regarding circumcision, were trying to take away the freedom found in Christ Jesus. He tells us that he and the apostles did not waiver for even a moment and the gospel taught by Jesus was preserved.

Paul goes on to say that the leaders of the church added nothing to his teachings. He then adds that their reputations didn’t matter at all to Paul because God shows no partiality. Thank heavens! He has no favorites. Remind yourself of this. God loves you - just as you are and you can do nothing to make Him love you more or less. We are all one in Christ Jesus and He loves YOU!

What stood out to you as you studied this week? Please, please, please SHARE! We want to see your journaling and hear about what you learned. Be brave - you never know when God is going to use you to bless someone else! 🙂 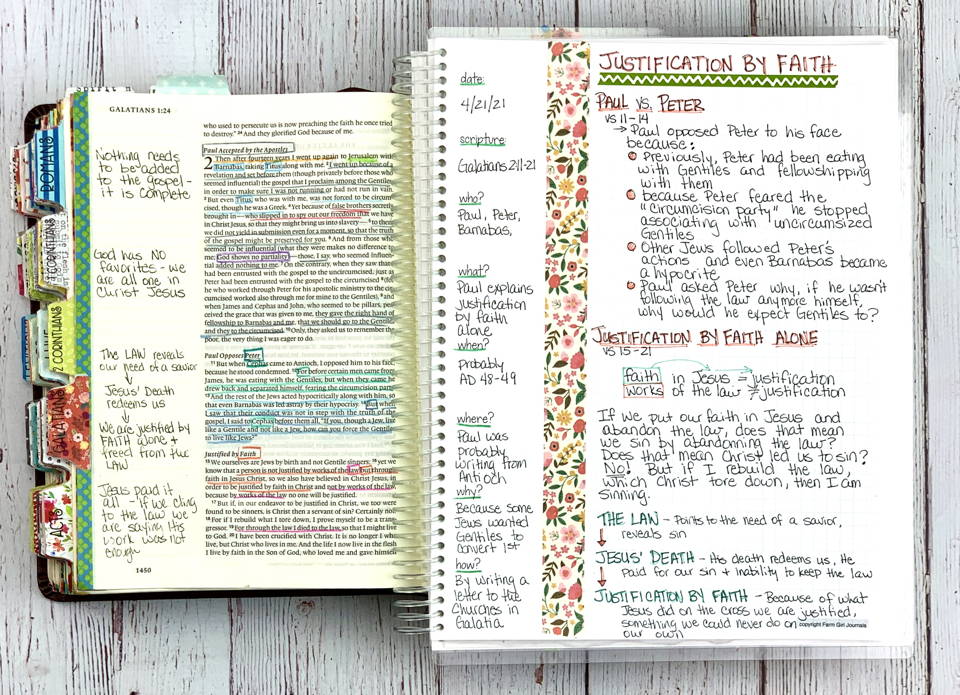 Good morning! I hope you enjoyed studying and journaling this passage as much as I did. Let’s jump in!

In verses 11-14 Paul tells how he opposed Peter “to his face” about his change in behavior. Apparently, Peter had been fellowshipping with Gentiles (eating in their homes) but then stopped because of pressure from the circumcision party (a group of Jews who taught that Gentiles must first become Jews before becoming a Christian). As a Jew, eating with Gentiles in their homes would be a huge no no - it would make Peter unclean. But as a Christian, it was what Peter was called to do to build the church.

Wouldn’t you love to have been a fly on the wall to see how this confrontation went down??? I would love more details - specifically how Peter responded, but we don’t know much more. I imagine it must have been at least a little bit hard for Paul to stand up to Peter. Here’s a guy who spent 3 years with Jesus, the man Jesus said He would build His church upon, and Paul says, “Sorry, Peter, but you’re getting it wrong and you’re being a hypocrite.” Ouch.

Paul goes on to further explain why this whole topic is such a big deal. Before Christ’s death on the cross, all Jews lived under the law. They attempted the impossible task of keeping the law in order to be justified or reconciled to God. It was a system of justification by works - the work of keeping the law. It was impossible, but at the same time there is comfort in the illusion of control when we think we are in charge. The law revealed our desperate need for a savior - it pointed to Christ. Jesus’ work on our behalf is what provides us with freedom from the law.

So there is a progression: 1)the law reveals sin and points to our need of a savior, 2) Jesus died in order to redeem us and pay for our sins and 3) when we put our faith in Jesus we are justified and freed from the law.

Paul is saying that you can’t go backwards.

If you believe Christ died and paid for your sins, but you also still want to cling to the law, you are nullifying His work. Clinging to the law and insisting that Gentiles become Jews is implying that Jesus’ death wasn’t enough.

But what a blessing to us that it WAS ENOUGH! He did it all on the cross and when we place our faith in Him we are justified before God. It is as if we never sinned. Thank you, Jesus!

What stood out to you as you studied? I can’t wait to see your journaling and read your thoughts!

Let customers speak for us

I have another like it except for the cover. The large print is great and I love to color. This gives me time in the Word.

Washi Tape - Happily Ever After

Love my Journal it's very beautiful thank you.